Due to unforeseen circumstances, the performance of Ladysmith Black Mambazo has been cancelled.

The cost of your purchased tickets, including all fees, will be refunded automatically.

No further action is needed on your part.
If you have any questions or concerns please feel free to reach out to our Box Office at tickets@marcuscenter.org or 414.273.7206.

Thank you for your support and understanding.
The Marcus Center Team

Ladysmith Black Mambazo has performed for millions of people, singing a message of peace, love and harmony.

“It isn’t merely the grace and power of their dancing or the beauty of their singing that rivets the attention, but the sheer joy and love that emanates from their being.”
Paul Simon

“They are musical uniters and global boundary-crossers and, especially now many of the members are of a second generation even as the rest of world has grown less connected, their warm-centered presence and harmonics both soothe and offer hope for a more empathetic world.”
The Chicago Tribune

“If you can figure out how to pack more entertainment into two hours than Ladysmith Black Mambazo ‘” using nothing more high-tech than the power of the human voice, and some microphones ‘” well, I’m all ears.”
Pittsburgh Tribune

“Undulating rhythmic phrases that push and pull … harmonising that is both ethereal and earthy.”
World Music, UK

“Above all LBM leave their audience in awe of the power and variety of the human voice and its ability to conjure up sounds which evoke the beauty and atmosphere of a land far away. What a gift.”
Yorkshire Post 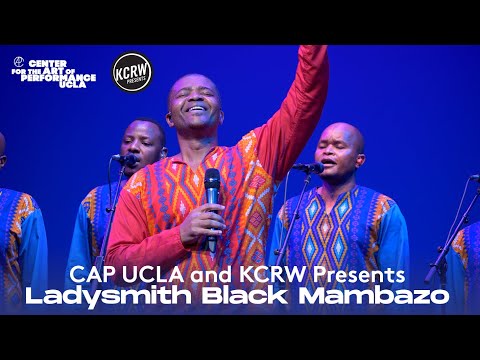